This document gives an overview and configuration of Web Cache in WAN Acceleration device.

Web Cache feature in WXA is used for web traffic caching. This feature behaves as proxy server for outgoing and incoming connection for web. The Web Cache feature stores copies of Web pages passing through the network that are frequently and recently requested. So when a user requests one of these Web pages, it is retrieved from the local web cache instead of the Internet, saving bandwidth and response time. Minimal, Moderate, and Aggressive caching strategies are available, these determine which objects are placed into the web cache and how long they stay there. Currently the web cache is done for HTTP traffic only.YouTube Web Caching: The Web Cache feature is capable of caching YouTube videos (currently only Flash video format is supported). This feature is only available when using Moderate and Aggressive web caching strategies. 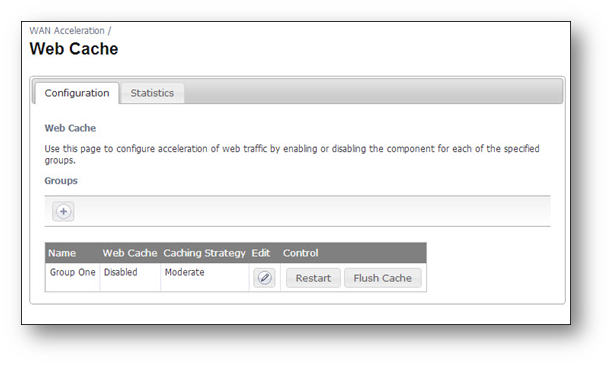 The WAN Acceleration feature above SonicOS 6.2 introduces WXA Groups(NOT supported by Gen6 TZ series), a.k.a WXA Clustering.When a WXA is detected, and the default group has been set, the WXA is assigned to the default group.

However, a user can unset the default group, in which case, the WXA is added to a list of unassigned WXAs. The WXA must then be added to a group manually by the Administrator before it can accelerate traffic.

In this article NSA UI will be chosen to demonstration the web cache feature.

1, Go to WAN Acceleration > Web Cache, under Configuration tab, click Edit icon of the Group(here default Group named "Group One" is used for demonstration),  Edit Group window will be displayed.

2, Also you can go to WAN Acceleration > Summary, in Groups section, click Configure icon of the Group. Edit Group window will be displayed similarly.

3, "Enable Web Cache" under Web Cache tab must be enabled. 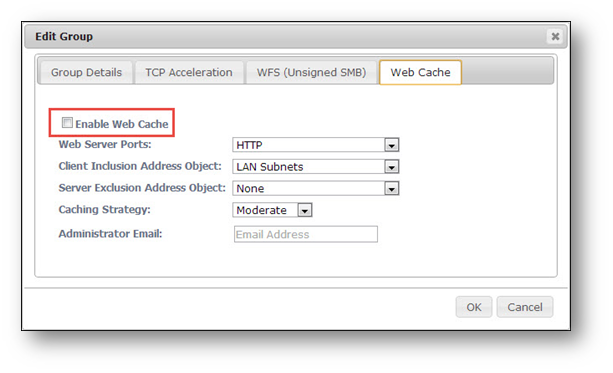 5, In web cache we have 3 different modes of performing caching: 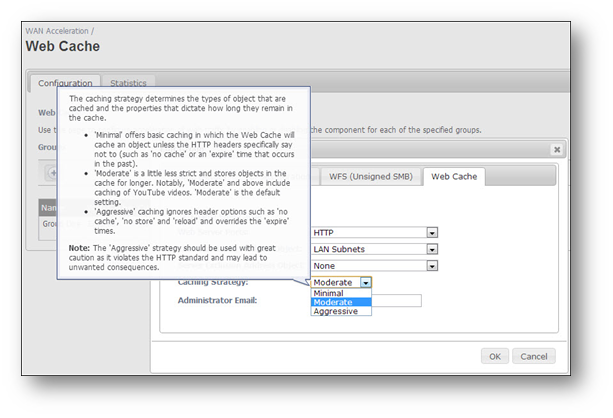 Minimal: All objects are cached unless the HTTP header specifically says not to, such as "no cache" or an "expire" time that occurs in the past.
Moderate: This is the default web caching strategy. In Moderate caching mode, the Web Cache keeps objects in the cache for longer than in Minimal mode. The Web Cache also enforces a minimum age of 7 days on objects that don't include any 'no caching' control options (such as no-cache, no-store or an explicit expiry time) in the HTTP header.
Aggressive: In Aggressive mode, the Web Cache ignores explicit expiry time (enforcing a minimum age of 7 days), reload and no-cache options in HTTP headers.

Note: The Web Cache never caches any data marked as "private" or "auth" (requiring authorization to access) in the HTTP header. When switching from Aggressive or Moderate mode to Minimal mode, any already cached objects that do not meet the Minimal caching strategy will be refreshed by the cache. YouTube caching is implemented in both Moderate and Aggressive caching modes.

The Statistics graphs display the Web Cache data for the selected Covering Period and Chart. The Conveyed data is the number of bytes that would be sent from a web server without the use of the WXA series appliances Web Cache. The Sent data is the bytes that are actually sent from web servers in response to the users web request, with the remainder being served from the cache. A "Hit" is when an object is served from the Web Cache instead of fetched from the internet. The following Chart types are available: