Sometimes after deployment of a SonicWall firewall with a built-in wireless radio, wireless devices will start to become unstable, dropping connection to the radio and reconnecting at random intervals. Despite this, the signal strength may show nearly full or completely full signal strength.

These symptoms are most often indications of issues in the wireless environment. There are a number of environmental considerations that can contribute to this, and can usually be narrowed down to those listed below:

Step 1: Make certain the Firewall is 2-3 feet away from EMI sources (Sources of Electro-Magnetic Interference) .

Electricity and Magnetism go hand in hand:  Any electronic device puts out an electro-magnetic field.  Often times smaller firewalls, used in a home or small business environment, are dropped into an existing network with little consideration for EMI sources.  Any device that consumes power generates an EMI field.  The more power the device draws, the larger the field.  Some common things to avoid are:

The interference of the field drops exponentially with distance: Removal of a firewall even 1 foot from an EMI field does much more good than the next two feet. Make certain, however, for optimal wireless transmission that the firewall is at least 2-3 feet from any EMI source.

Placing a wireless-enabled firewall on or adjacent to a flat metal surface, such as on top of a metal filing cabinet or next to a steel beam, can cause the wireless signal to bounce into itself as it leaves the firewall, causing interference before it can even leave the area of the firewall.

Imagine dropping a pebble on the surface of a still pool, and watching the ripples flow away.  Consider for a moment that the pattern that those ripples form are a signal, similar to wireless radio waves coursing through the air when seen from a top or side view.  Now imagine that when you dropped the pebble, you did so right next to the edge of the pool.  The waves will bounce back off the wall at the edge, and those 'bouncing' waves will go back to interfere with new waves that are being created, and depending on variables, can break up the original signal.  This is very much what occurs when a wireless device is placed on a flat metal surface:  It is that much harder for all devices to get wireless signal.

Thick concrete walls, wire-mesh behind drywall, and even thick wood or EMI devices within line of sight between the clients and the wireless firewall can impede signal strength, much like light waves passing through layers of fog, or ripples in water passing through wire screens or layers of wire screens. Thicker or stronger barriers will degrade the signal wave. Moving the firewall to have a wireless "line of sight" that has less of these barriers to pass through can often help.

Step 4:  Keep the Firewall at least 10-15 feet from other wireless transmitting devices

Common items in both small business and home environments often transmit wireless signal at 2.4 Ghz, which is the most common wireless frequency.  Devices that transmit on the same frequency, within 5 channels of the channel of your wireless device, can interfere with the signal from the built-in wireless when in close proximity.  Some common examples of conflicting wireless devices are:
In order to interfere with the 2.4 Ghz Spectrum, wireless devices do NOT need to carry a digital signal, they merely need to transmit, or even oscillate at, the 2.4 Ghz spectrum.  These are often even more devastating to wireless signal then items in the list above.  Such items include, but are not limited to:

Step 5:  Make certain wireless clients are 10-15 feet away from the SonicWall if transmitting at full power.

SonicWall wireless Radios are powerful.  When a client device, such as a laptop, is directly on top of a wireless firewall, it might pick up the wireless signal, but when backed up even a foot away, it is unlikely that a stable signal will be maintained until removed at least 10-15 feet from the unit, if the Wireless Radio is transmitting at full power.  This is due to the fact that the first wireless wave must be able to transmit out at a certain distance from the device.  However, if the environment is ideal and free from other access points and physical obstructions, it is theoretically possible to get wireless within 150-300 feet.  Most environments are not this ideal, so 100 feet is usually more likely, giving around a 90 foot radius of wireless.  This is what is often referred to as the "wireless donut effect".

If most wireless devices are going to be within 20-40 feet of the radio and are expected to be closer than the 10-15 foot radius, it will be necessary to drop the wireless transmit power down to 1/4th, or even 1/8th of the full transmit power.  This is done under Wireless > Advanced in the 5.8 firmware. 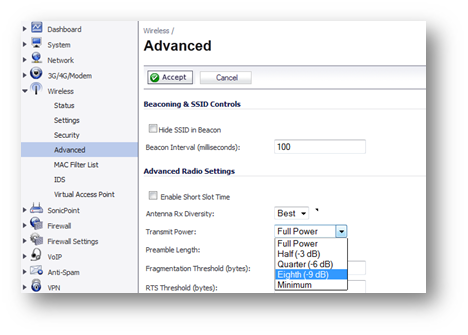 Step 6: Make certain the wireless channel is not being overrun by a competing access point.

Even if you have successfully kept the SonicWall at 10-15 feet from other wireless transmitting devices, it is possible that another wireless access point with a strong signal can be interfering with your wireless signal. A look under Wireless > IDS will show you other access points in range of your SonicWall firewall.  Closer or more powerful devices show up with a high percentage of dBm (Decibel-milliwatts).

The percentage is merely a reflection of the signal seen in Decibel-milliwats. Signal between 35%-50% may or may not start to interfere with your network signal if on the same channel. Anything seen at 51%-64% is likely to interfere with the wireless in that area, and anything higher than 65% will almost certainly overwhelm your network if you are transmitting on any channel within 5 channels. 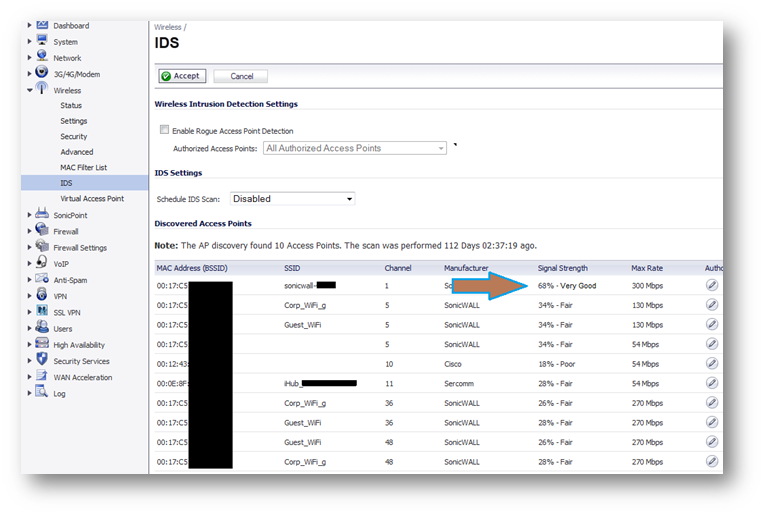 In this example, channel 1 shows a "Very Good" signal, which means the channel is being interfered with, despite already having performing the above steps. In such an instance, the administrator will want to make certain to transmit signal at a channel that is at least 5 channels away from channel 1, such as channel 6 or a higher channel, if possible.

It is worth noting that this IDS scan will only see signal from the point of view of the firewall itself, NOT from the Point of view of the client devices, (such as where users will actually be sitting with their laptops and wireless enabled smartphones, etc). If there is signal from another wireless device nearby that is interfering with users in the back of the room where signal is actually desired, the SonicWall itself might not be able to determine this. It is always recommended to perform a wireless site survey before configuration of a wireless network or wireless access points.

Once these steps have been performed, check the stability of the wireless client signal.  If it does not improve, a full wireless site survey is recommended.

Always make certain wireless stability issues are not isolated to a single client, or to a small number of clients. Performing tests from multiple kinds of wireless devices is ideal, such as those that have MIMO vs SISO capability, or clients that are dual band, or even wireless G only. Even testing from multiple devices that use similar radios can reveal issues with specific devices.